Kralupy nad Vltavou 23 September 2021 – Today, MERO ČR, a.s. ČR, a.s., the operator of oil pipelines in the Czech Republic, organized the largest safety exercise in its history for protecting critical infrastructure. In addition to employees from MERO ČR, a.s., the Czech Army with the Regional Military Headquarters in Prague-Central Bohemia and the Infantry Company of Active Reserves, the Police of the Czech Republic, the Fire and Rescue Service of the Czech Republic, and the Fire and Rescue Service of Synthos participated in the event entitled SAFEGUARD 2021. All components successfully tested their involvement in the protection of part of the country’s critical infrastructure in the event of an emergency or crisis situation.

The exercise also included a test of the ability of MERO ČR, a.s. to defend against cyber attacks, an increasingly common threat these days, and the cooperation between MERO ČR, a.s. and the rescue unit of the Fire and Rescue Service of the Czech Republic in cleaning up an environmental accident on the IKL pipeline was verified.

A simulation of a demonstration was held directly in front of the entrance to the central oil tank farm, with an attempt to provoke a conflict, including an injured protester, provision of assistance, and the detaining of aggressive demonstrators.

Another simulated situation was a tank being punctured, a fire starting, and it being subsequently extinguished. The scenario also included a violent attempt to enter and pass through the tank farm, with the aggressors being detained, and handed over to the police. The simulation ended with a demonstration of the intervention options of firefighters in the extinguishing of a tank fire.

“Today’s exercise confirmed that we are well prepared for a potential crisis situation. We also tested our cyber protection and the functioning of our crisis management. We are intensively involved in ensuring cyber security and the obligations of a manager of critical infrastructure. We regularly check the effectiveness of the established security measures and invest in the means to ensure them”, says Jaroslav Kocián, Chairman of the Board of MERO ČR, a.s.

MERO ČR, a.s. is currently preparing an extensive restructuring of its security systems for technical protection, including a comprehensive replacement of the security technologies at its facilities in several stages.

SAFEGUARD 2021 confirmed the readiness of the employees of MERO ČR, a.s. for a wide range of current hybrid threats.

“The Czech Republic is one of the safest countries in the world. The practiced scenarios of possible threats are based primarily on foreign experience, and the probability of them really occurring in our country is low. However, the authorities of the state security forces are also preparing for these scenarios. The training of the security forces on a specific part of the country’s critical infrastructure provides, above all, very good tactical knowledge of the object they would have to protect in an emergency,” said Major General Miloslav Lafek, Director of the Capability Planning Section of the Ministry of Defense.

The central oil tank farm (COTF) serves for the storage of strategic emergency oil reserves for the State Administration of Material Reserves, for the storage of oil for commercial entities, and as a short-term intermediate storage for oil transported by the Druzhba and IKL pipelines. Mixing of different types of oil takes place according to the requirements of our customers – refineries. The total storage capacity is 1,675,000 m³. All tanks are above ground, with a steel protective retention sump and a floating roof. Covering an area of approximately 59 ha, the COTF is located in the districts of Mělník and Kladno, in the cadastral areas of the municipalities of Nelahozeves, Podhořany, Uhy, and Sazená. 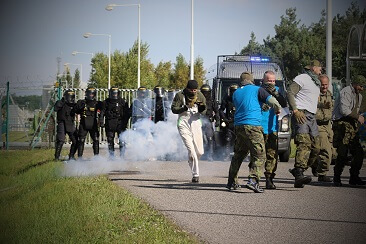 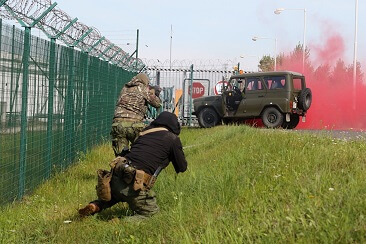 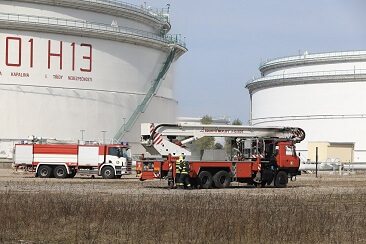